Studies of Religion 12 - Martin Luther and the Reformation: Links

One of the greatest of all revolutions was the 16th-century religious revolt known as the Reformation. This stormy, often brutal, conflict separated the Christians of western Europe into Protestants and Roman Catholics. So far-reaching were the results of the separation that the Reformation has been called a turning point in history. It ushered in the Modern Age because, once the people’s religious unity was destroyed, they began to think in terms of their own regional interests. From the diversity of those interests arose new political, social, and economic problems and beliefs.          Excerpt from: "Reformation." Britannica School. Encyclopædia Britannica, Inc., 2013. Web. 8 Sep. 2013. 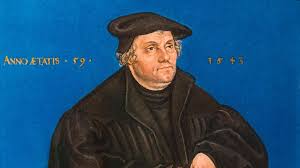 Great essay on changes to worship - get your highlighter out!!! - Martin Luther the worship leader

Martin Luther on the History Channel